It’s December, and you know what that means! It’s time to fish out your Christmas ornaments, Santa hats and ugly sweaters to wear when your office tries out ugly sweater party ideas!

Ugly sweaters are a gag, though some would teasingly say it’s a crime against fashion. (RIP Joan Rivers and her scathingly frank Fashion Police show). But at the end of the day, wearing them is at least a shared misery!

1 Why Do We Have Ugly Sweater Parties? 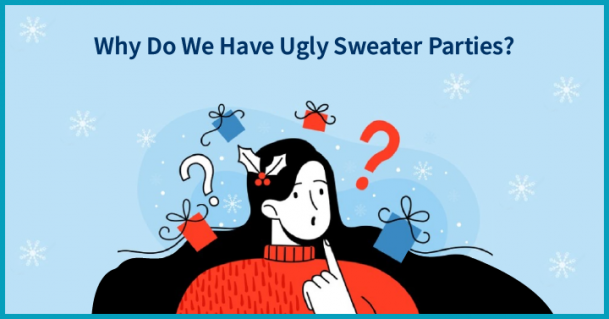 Throwing ugly sweater parties can be a great way for offices to wind up for the holidays and have fun before the Christmas break. It’s also part of the Christmas countdown! Ugly sweater parties started out in the 50s when Christmas was heavily commercialized. They were marketed as “Jingle bell sweaters” and featured subtler designs. In fact, they were intended to be more artistic than tacky or ugly.

In the ‘70s and ‘80s, artistic expression took the ‘commune hippie’ route. Many wanted to sport a look that was unique and began adding gaudy designs and trinkets to their sweaters. Even TV shows caught on to the trend, with the lead character Cliff Huxtable sporting a “Cosby sweater”. The Cosby sweater, which had a design of a badly-drawn reindeer against a black and white pattern, became synonymous with ugly sweaters from then onwards.

Ugly sweaters quickly became an idea for handmade or DIY gifts. The inside joke was that you couldn’t refuse them, especially if it was knitted by someone you know (a relative or friend). It was common for family members to wear it and pose for holiday pictures (and yes, many baby boomers and geriatric millennials can attest to owning at least one family photo where they have a sullen face and an ugly sweater on!).

From 2010 to now, ugly sweaters have continued to be worn as a gag outfit, even by CEOs. There’s now an official day to wear the sweater, called Ugly Christmas Sweater Day which falls on December 21! If Netflix’s CEO Reed Hastings can wear his holiday sweater loud and proud, why shouldn’t you?

2 What is the best way to throw an ugly Christmas sweater party?

2.1 Design evites and send them out in advance.

The build-up gets teams into the spirit and is half the fun! You can always compose an email and/or shoot a quick message to members on a virtual platform such as Skype or Teams. But why not go the traditional postbox route and mail the invitations to everyone? It’s an opportunity for your graphic designers to design a snazzy card while your marketing department comes up with creative wordplay in the message inside!

If you want to send out cards, we recommend planning to do so by the end of November or early December to allow for sufficient time for everyone to confirm that they got their invites. The Paperless post and Postermywall both offer design invitations that you can further customize before sending out. They come in different sizes which you can specify after selecting a design.

It’s not a party without refreshments! In keeping with the festivities, arrange for cocktail kits and finger food. Go crazy and bake cookies in the shape of trees or Santa hats.

2.3 Fish out your sweater

If you don’t have a sweater set aside specifically for Ugly Sweater Day already, select one from your closet that you can afford to redesign and fashion.

This is one of those occasions where no one will judge you if you can’t draw a straight line! You can draw anything (literally)- exaggerated reindeer with plastic eyes and cloth antlers sticking out of the sweater, or a Santa grinning ear-to-ear.

Vote for the ugliest Christmas sweater. The winner gets bragging rights! Sweeten the deal with cash or a token prize for an ugly sweater contest such as a desk or wall memento or personalized company stationery. 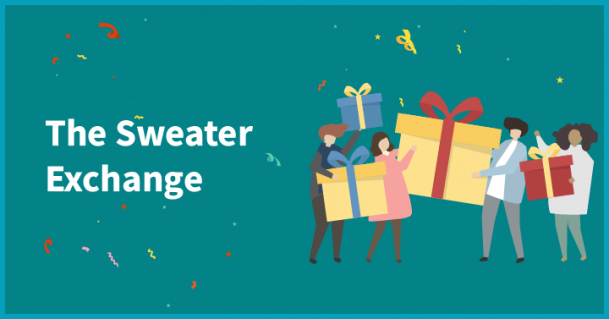 Like a secret Santa, have a not-so-hush-hush exchange by pairing teammates at random. The pairs have to exchange sweaters and take a picture wearing the other’s ugly sweater. It doesn’t matter if two people aren’t the same size; it could in fact be even funnier, if the sweater comes up short, or too baggy,adding extra humor to the situation! 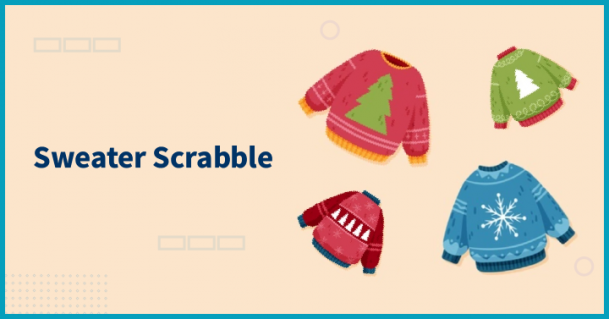 Sweater scrabble is a blind draw of ugly sweaters in a room. You can ask for an estimate of everyone’s dress size to make sure that there’s one of every size. This way, if someone’s first pick doesn’t fit, they have their own size as an option. Pile the sweaters in a heap in one of the office rooms ahead of everyone coming in. Party guests should be blindfolded before being led to the room. They have to pick a sweater from the pile. Once they take their blindfold off,they can see just how terribly ugly the sweater they picked is! You can video the picking process but this is optional. 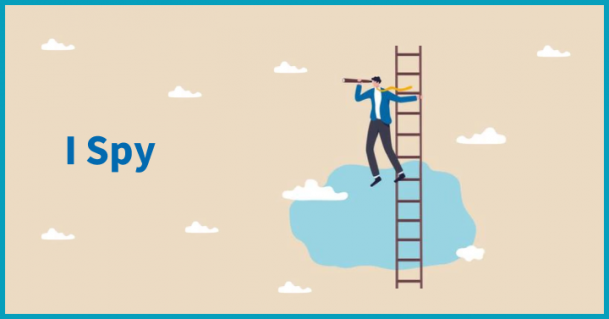 Turn this simple children’s game into an ugly sweater party idea by looking around the office and describing an object to the contestants.Make it hard to guess by making your description intentionally vague or veiled.  Everyone can take turns to play. Whoever is the fastest to guess the object being described or gets most of the guesses right wins! 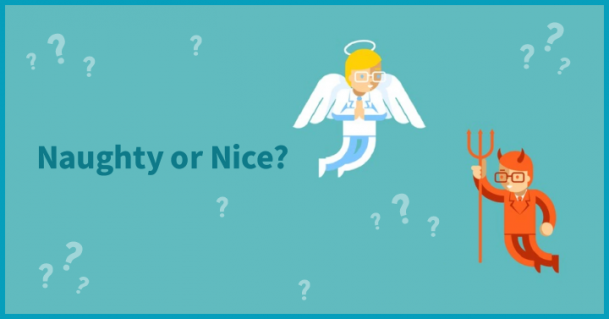 Separate your guest list into  ‘Naughty’ or ‘Nice’ based on their responses to the following questions;

I found a quiz on howstuffworks that asks multiple-choice questions and generates the results based on how you answer. I somehow managed to land up on Santa’s ‘banned’ list though (Welp! Nobody told me there’d even be a third option). Do check the site out or take a Buzzfeed quiz for Christmas-sy inspiration! 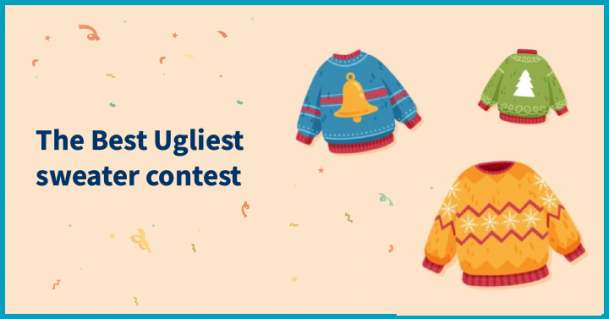 Holding a best Ugly Sweater contest sounds like an oxymoron, doesn’t it? Go all out and design(or buy) the ugliest sweater you can! (if it’s that ugly, maybe the prize for ugly sweater contest can be to give it away and never see it again!)

I saw a few options on Amazon, Instagram and Etsy, which include a Nutcracker outfit, or an adorable Yeti made of cotton with a feather boa trim. The person who wins the ugly-est sweater contest gets an extra-large stocking for the office Santa to fill with company merch! 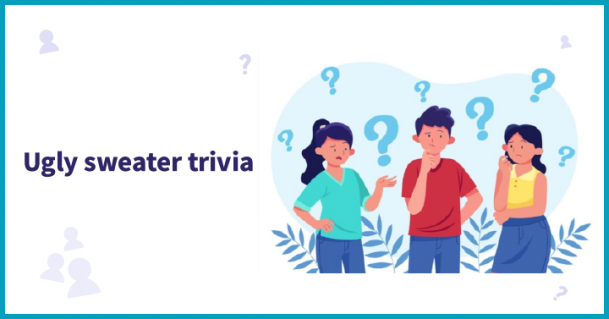 Host a trivia night with general topics, or try Zimbio’s quiz to match ugly sweaters to the movies. The white elephant also has trivia questions that you can select before guests file into the office. Just remember to have the answers down in secret on your phone to pull up and verify as and when people shout out answers! 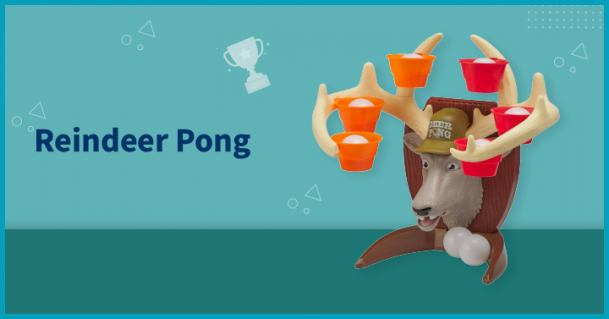 Does everyone know the names of all 9 of the reindeer pulling Santa’s sleigh? Find out with Reindeer Pong! For every wrong guess, the guesser has to down a shot and continue till they a) admit defeat or b) get very drunk. Arrange for a selection of   . happy hour cocktail kits as well as non-alcoholic mocktails, based on individual preferences.

Did someone miss the memo and turn up to the ugly sweater party in an non-ugly sweater? The sacrilege! Whoever is wearing a regular sweater must turn it inside out and pose with a prop(such as a candy cane, paper moustache or elf hat- no questions asked! 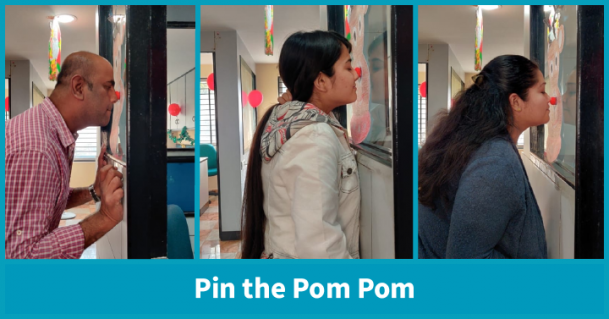 In this Christmassy version of Pin the Tail on the Donkey, we drew a cut out of Rudolph and had people dip their noses in vaseline and a red mini pom pom to pin on the drawing. The challenge was to get to the drawing without the pom pom falling off en route!

Get ready to strike a pose in ugly sweater fashion show. You could start by giving runway lessons to create a perfect balance. Make it unforgettable by transforming your environment. 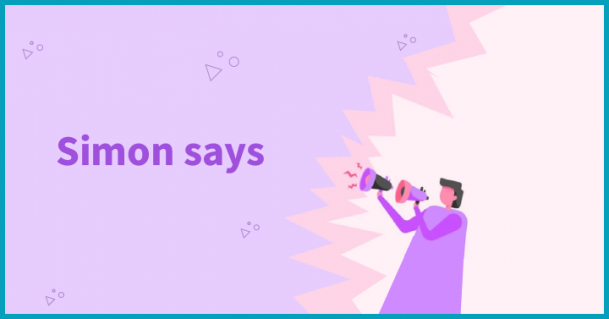 Simon says, is one of the best ugly sweater party ideas to try out with a remote and distributed team. It can be engaging so long as everyone has their video on as the commands are being issued.

The players should only respond to commands that begin with ‘Simon says’. Here are some ‘Simon Says’ examples to get the party started, 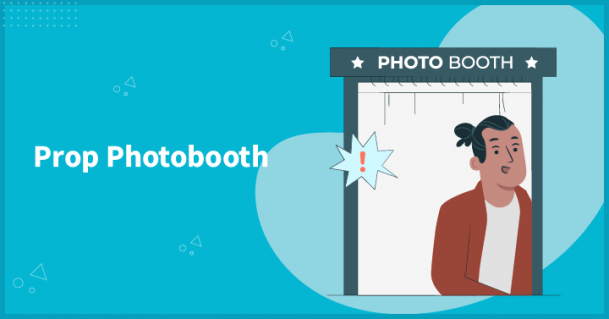 What event would it be if it wasn’t captured digitally? Click pictures of the team wearing Elf hats or posing with Christmas props such as candy canes, Santa Hats and Star Angels. We bought a box of wearable props back in 2019 that’s still somewhere in the office, but you can also print out stickers and ship them to everyone before the party so that they’re ready with the props when it’s time to take screen grabs! 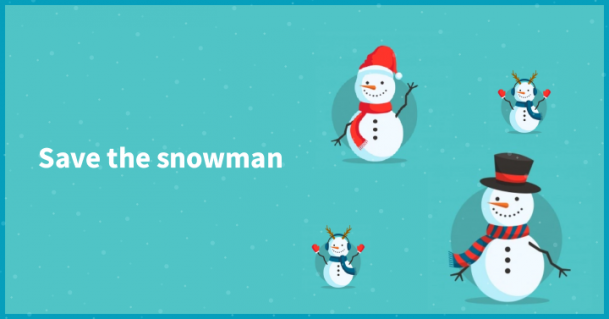 This game reminded me of the hangman that was on our desktops in the late ‘90s/2000s.I admit I spent more time than necessary on LaughingHyena’s hangman (all part of the writer’s research,I promise you) and concluded that it’s quite addictive! This Christmas holiday-themed hangman features a snowman who’ll lose his stick legs, carrot nose and head if you fail to fill in the right letters from the alphabet below! A game that can be played anytime, anywhere-making it a great ugly sweater party idea to try out when the group’s dispersed! 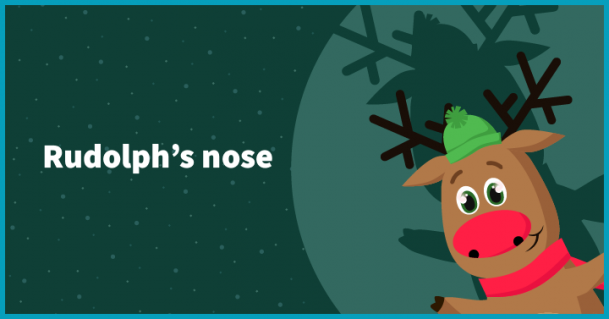 Who can fashion Rudolph the Reindeer’s most recognizable feature using material lying around their house? Create a Christmas ugly sweater contest where teams compete to create a red nose using anything they can find around the house. The challenge? Doing it in under a minute! You can add this to your list of minute-to-win-it games too.

5 How Do You Host an Ugly Sweater Contest Virtually? 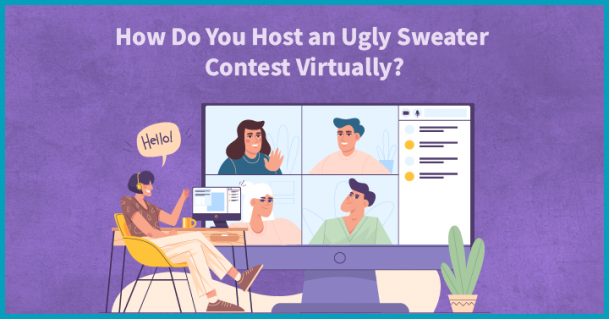 6.1 When did ugly sweaters become a thing?

Ugly sweaters became popular after 1950. Back then, it was intended to imbibe the cheery spirit of Christmas. Over the decades, it took on a more gaudy look, with sweaters featuring 3D items such as pom poms, antlers, googly eyes and Santa beards.

6.2 What do you do at an ugly sweater party?

You wear your garish sweater proudly for that one day and take comfort in knowing that you’re not the only one to wear one! You can even decide on Christmas specific colors such as red, green, gold and white to feel less odd on Dec 21!

6.3 What do you serve at an ugly Christmas sweater party?

Here’s an assortment of snacks you can list on an ugly Christmas sweater party menu:

6.4 What are the best ideas for ugly sweater contest?

6.5 What are the best ugly sweater prize ideas? 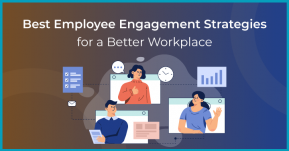 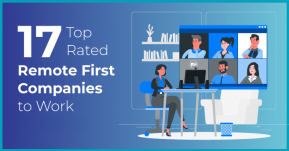 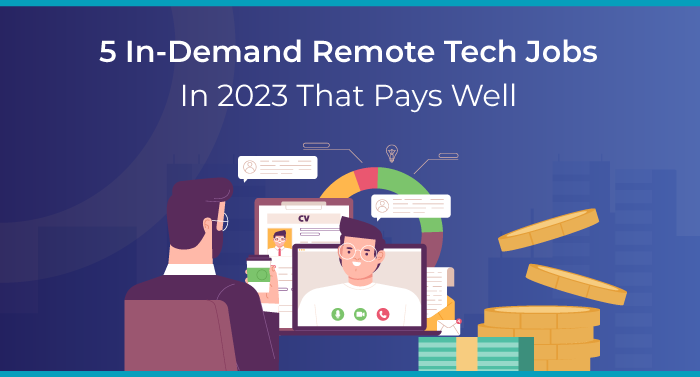 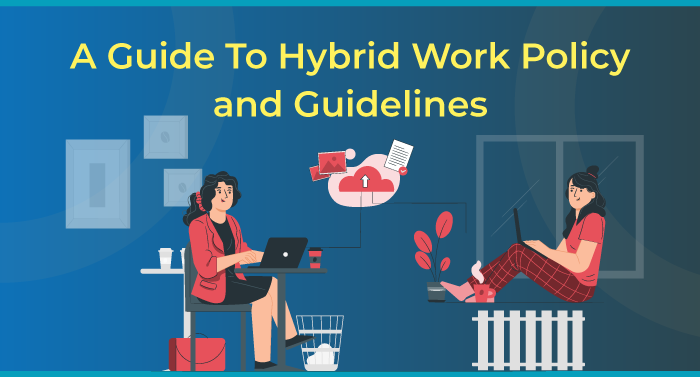 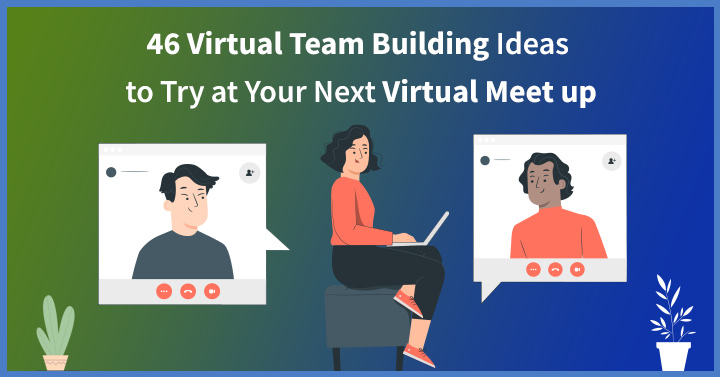